Discover the history of la Lonja and our restaurant in Palma 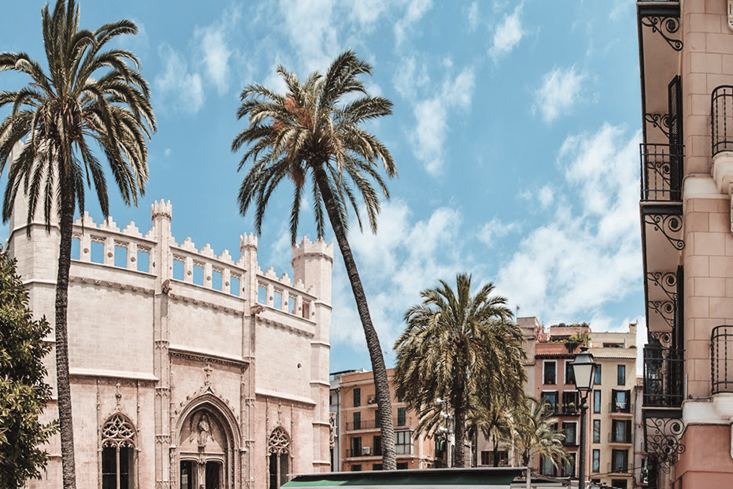 The privileged area of la Lonja of Palma is one of the most select and cosmopolitan areas of the city’s old town. Its eccentric streets offer a carefully put together gastronomic offer and pieces of the most important history of Mallorca. All of the main sights come together in the emblematic Lonja and in the indispensable establishments such as the Forn de Sant Joan, our restaurant in Palma. We will be telling you all of the secrets of this key area in this article.

La Lonja: the home of merchants through history

The mythical square of la Lonja, with its splendid and emblematic building, and its adjacent streets are watched over by the careful eye of the Ángel Defensor de la Mercadería de Claus Sluter, a work of sculpture which stands out on the main façade of la Lonja. Guillem Sagrera, the adored Mallorcan sculptor, was put in charge of building the merchants’ home in the 15th century. The result was an impressive building with Catalonian gothic style which over the years has become an important emblem of Palma. Not only does it have a privileged location, but its streets delve in to the city which hides authentic historical gems such as our restaurant in Palma.

Leaving behind la Lonja, we enter in to one of the busiest and well-known Mallorcan leisure and gastronomy streets: the calle de Sant Joan. In the 19th century, the Forn de Sant Joan was created, it was a local bakery where anyone and everyone from the area flocked to buy bread and sweet treats. After dozens of years of trading early in the morning, Joan Baqués, the founder of Forn, decided to transform this old oven into a careful and refined restaurant with a unique gastronomic offering. During its new life, the Forn de Sant Joan, our restaurant in Palma, was remodelled and refined by Christian and Carlos, the sons of Baqués, in order to offer a unique place amongst the gastronomic offering along the calle de Sant Joan, which unites four environments separated by different rooms and an offering of Mediterranean cuisine which has made us one of the best restaurants in Mallorca.

Reserve your table at our restaurant in Palma

If you would like to discover the history of Mallorca through your palate, our restaurant in Palma offers a unique way to do it: in the classic oven of the Sant Joan Street, along with its emblematic building of la Lonja and with a Mediterranean essence which will leave you wanting more. Reserve your table at our restaurant in Palma and immerse yourself in Mallorcan idiosyncrasy.